In effect, his license which guarantees his employment with GES has been suspended while he has been relieved of his position.

In a post to announce the grim news, Teacher Kwadwo who doubles as a comedian said he was targeted by GES and his sack letter was prepared long before it was given to him.

According to him, the only reason was sacked was his constant back and forth with the statutory institution.

“Okay, so for some “PROFESSIONAL” reasons I can’t post the content of the letter here but all that is in the letter is that, My District Education Office through Ghana Education Service says that, they have sacked me. Their reasons are very funny. This is going to be the 1st ever TEACHER vs GES fight in the history of Ghana Education. Y’all relax because it will be all over the news soon and y’all will know the head and tail of it. ?b?y? butubutu.”

“The SACKING letter that was given to me yesterday is dated “27th october 2021”. Abeg what was yesterday’s date? Meaning, they have typed the letter looooong time and was looking for an opportunity but since they don’t get it, they have given it to me like that. W?n atet? me aky?!

In a series of social media posts, Teacher Kwadwo has promised himself not to allow the issue to slide. According to him, he was witch-hunted by GES and unlawfully expelled from the classroom.

Someone pls gimme the number of that  Achimota Rasta student. He will be my lawyer for this case.I know he go fit whip Ghana Education Service simple koraa. 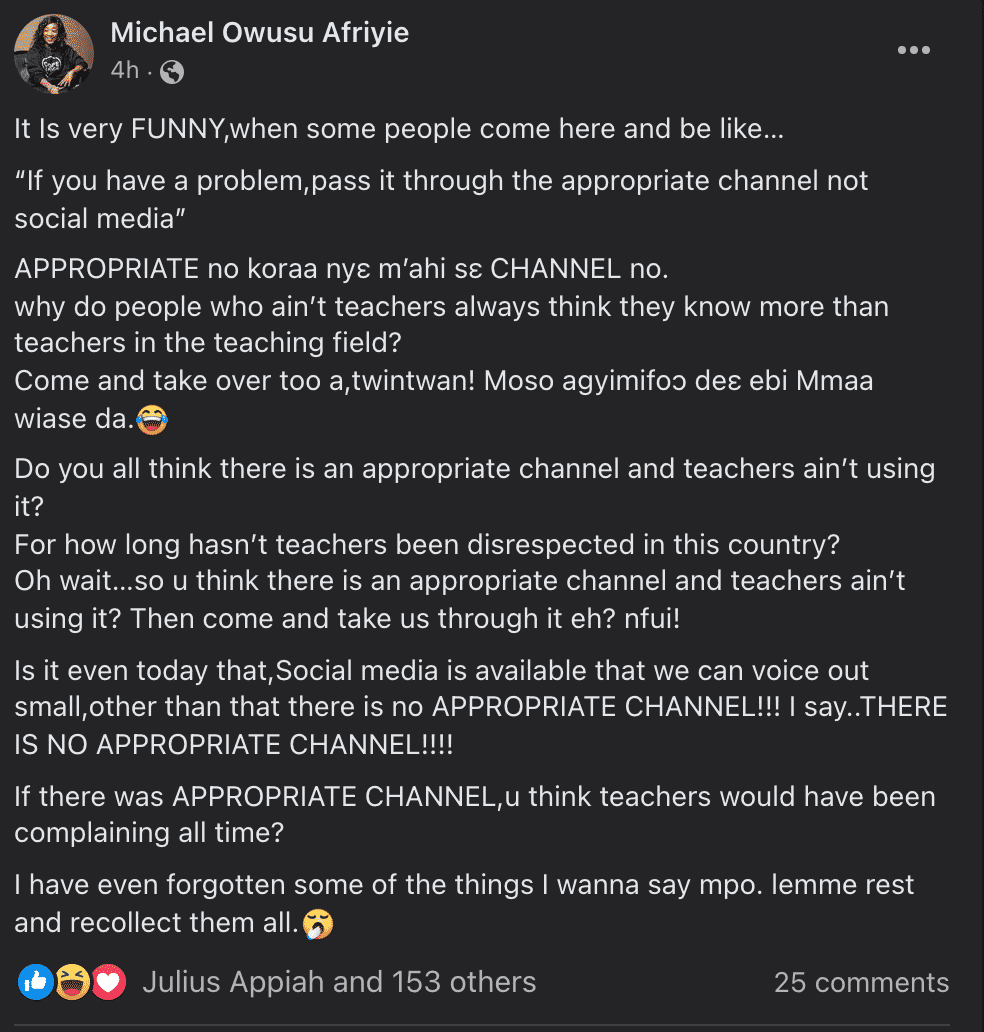 Prior to his dismissal, teacher Kwadwo was summoned by GES for ‘professional misconduct.’ He faced the Akrofuom District Education Directorate on August 10, 2021.

He has been one of the most outspoken educators in recent years, urging the Ghana Education Service to improve the country’s educational system.

Teacher Kwadwo has been touring various parts of the country to bring to light some of the early challenges facing the education sector, ranging from poor remuneration to poor classrooms.

Although the GES has not explained its decision, Teacher Kwadwo insists that it is the result of his intensive social media campaign aimed at highlighting major issues affecting the teaching profession and the need for immediate attention.