Ahead of Prince Philip’s burial, which holds today, Buckingham Palace shared a touching unseen picture of the Queen with her husband, who died peacefully at the castle on Friday, April 9, at 99.

The Queen will say a private farewell to Prince Philip before his coffin leaves Windsor Castle for today’s funeral.

The monarch, 94, will take a moment to reflect at the duke’s side ahead of his final journey to St George’s Chapel.

Sources say she has been the “epitome of dignity” this week as she deals with the loss of her husband of 73 years, and has insisted on personally signing off final preparations for the 3pm service.

The photo released by Buckingham Palace shows Queen Elizabeth II and the Duke of Edinburgh at one of their “happy places” – the Coyles of Muick hills close to Balmoral, where they enjoyed walking and picnics throughout their long lives together. 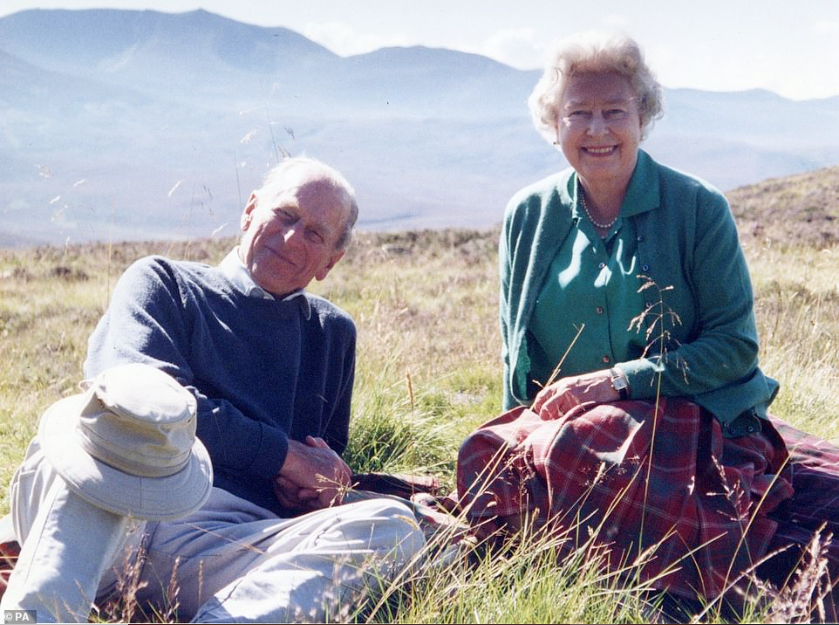 Queen Elizabeth loves the place that she named her new corgi puppy after it.

The photograph, taken by their daughter-in-law the Countess of Wessex in 2003 during one of their family summer holidays, was specially chosen by Her Majesty to share ahead of today’s funeral.

Prince Philip’s coffin, draped in his personal standard and bearing his naval cap, sword and a wreath of flowers, will first be seen at 2.41pm today when it emerges from the State Entrance to Windsor Castle carried by a bearer party from The Queen’s Company, 1st Battalion Grenadier Guards.

It will then be placed on the Land Rover hearse that Philip personally designed for the occasion for the eight-minute journey to the chapel, followed by a procession of nine family members.

The service will begin with a minute’s national silence, as Philip’s coffin rests on the West Steps of the chapel to remember the late Duke.

No planes will land or take off at nearby Heathrow for six minutes to coincide with the minute’s silence.

I Have Been Blessed With A Millionaire Wife