Leicester produced a super performance to beat West Brom 3-0 and tighten their grip on third spot in the Premier League.

Goals from Jamie Vardy (23), Jonny Evans (26) and Kelechi Iheanacho (36) in the space of 13 first-half minutes took the game away from West Brom to dent their hopes of an unlikely escape.

The victory takes the FA Cup finalists four points clear of West Ham in fifth, while Sam Allardyce’s side stay on 24 points – still nine behind Burnley in 17th.

How Leicester saw off West Brom

The game at the King Power Stadium was remarkably open from the outset, Kelechi Iheanacho squandering a one-on-one chance in the third minute, a poor touch allowing Sam Johnstone to close him down.

At the other end, within moments, Mbaye Diagne contrived to miss his kick entirely when in space just yards from goal. A wastefulness West Brom fans have become familiar with.

Man of the match: Jonny Evans

It proved costly as Leicester took the game away from the relegation strugglers midway through the first half after some excellent work by Youri Tielemans in the build-up.

The Belgian midfielder broke the offside trap to find compatriot Timothy Castagne and his square pass was expertly converted by Vardy for his first goal since February.

That appeared to deflate West Brom and the visitors were two down within minutes when a right-wing corner found its way to Evans via Callum Robinson, enabling him to head home.

The Baggies were rocking by that point, their recent momentum just a memory as the returning James Maddison found Castagne in space only for his low shot to strike the post.

Leicester made two changes from the side that beat Southampton in the FA Cup semi-final at the weekend. Ricardo Pereira was among the substitutes, having come off with a tight calf at Wembley, while Ayoze Perez also dropped to the bench.

James Maddison was back in the Leicester team, along with Luke Thomas, who both started for the first time since February.

Unsurprisingly, West Brom named the same starting line-up after beating Southampton ten days ago in the Premier League. The only change came on the bench with Kieran Gibbs dropping out of the matchday squad. Romaine Sawyers came back in.

Matheus Pereira did manage to strike the crossbar with a corner but it offered only momentary respite. When Vardy turned Dara O’Shea and unselfishly passed to Iheanacho, it was three.

That was the in-form Nigerian’s 11th goal in eight games – astonishing form – and he might have made it four before half-time, firing over after some glorious skill to bring the ball down.

Allardyce made a change at the interval, adding defender Semi Ajayi for forward Callum Robinson, and with Leicester having done the hard work it made for a calmer second period.

Vardy attempted an ambitious effort from distance that did not begin to trouble Johnstone, while Iheanacho tested the West Brom goalkeeper rather more with a curling free-kick.

But there were no more goals, the game decided in that frenzied first half. It could well have decided West Brom’s fate too. Leicester will hope there are bigger achievements ahead.

Man of the Match: Jonny Evans

There was so much attacking flair on show from the Foxes that it seems almost churlish to select a centre-back but Evans’ performance was just so easy on the eye. When he was not spraying balls left to Luke Thomas, he was finding Castagne in space on the right.

Defensively, he was assured, putting in one vital tackle inside the penalty box during the first half. Offensively, he popped up in the West Brom area to double Leicester’s lead with his head. Against his former club, the 33-year-old Evans produced the complete display.

What the managers said

Leicester manager Brendan Rodgers: “Any win in the Premier League is always a good win, especially against a team that has showed really good form of late and had a good rest period coming into the game.

“It was an excellent victory for us. I said to the players beforehand that this is the time of the season where just because we’re in the [FA Cup] final, it’s not one foot in and one foot out. We’ve got other targets and we have to have that determination and commitment until we get to the final.

“It wasn’t perfect, I was annoyed at half-time, I have to be honest. I thought the goals were exceptional, some of our play was very dynamic, we looked fast, pressed the game well. But there were too many loose passes, too many mistakes – simple mistakes – when we needed to be more precise. 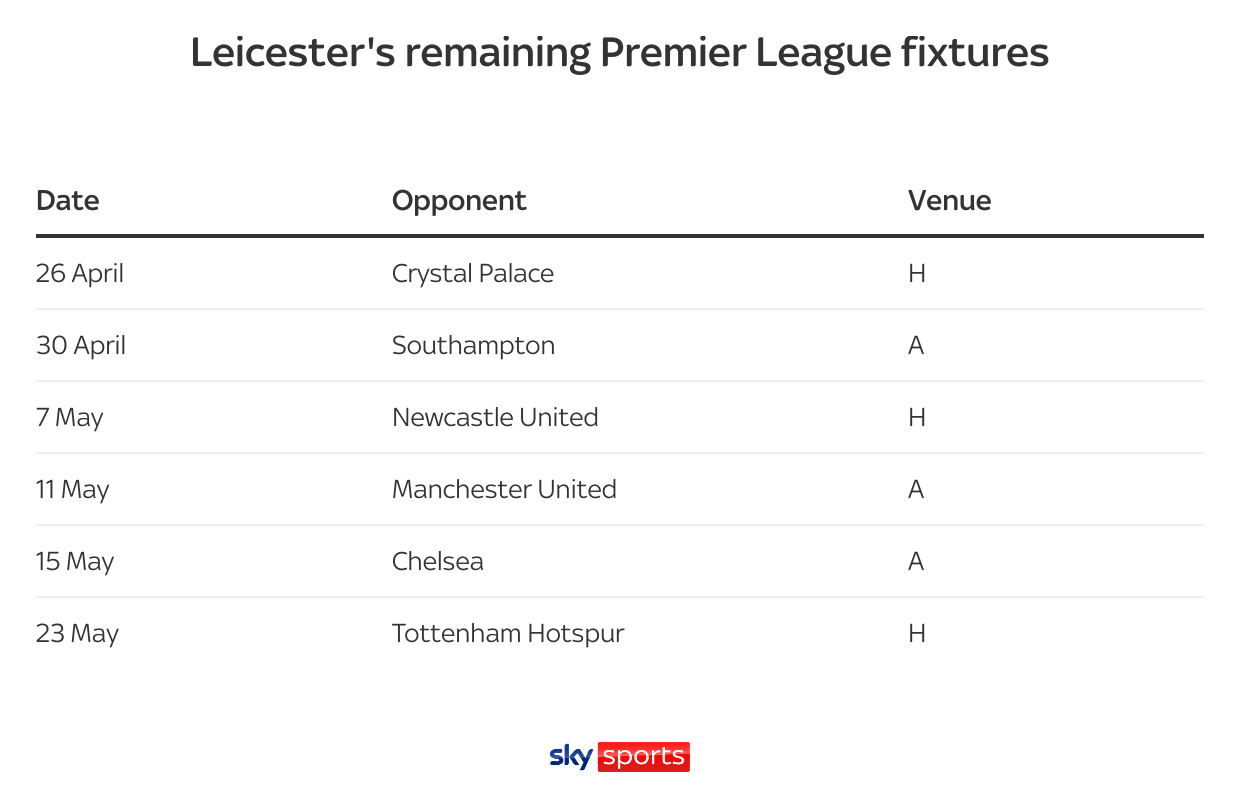 “In the second half, we were able to control the game. Overall, delighted with the three points and three very good goals.

“I am not thinking about the other teams, we have to think about ourselves. We can only control ourselves. There’s nothing guaranteed, we want to arrive in the top four.

“This is a team which has been evolving but I can’t ask for anything more from the players.”

West Brom manager Sam Allardyce: “It’s obviously very disappointing for us, but I think there are defining moments in some games. When you know you’re coming across a team like Leicester, and you’ve heard me talking for many weeks now about taking your chances when they arrive and ours came through Mbaye [Diagne, early in the first half].

“If you don’t take it, when you’re playing a team at this level, who have got all their injured players back, who are on song, you must take that chance and get 1-0 up. But when you miss that chance, you can pay the price and we certainly did pay the price in the first half because Leicester came into the game and overran us then. 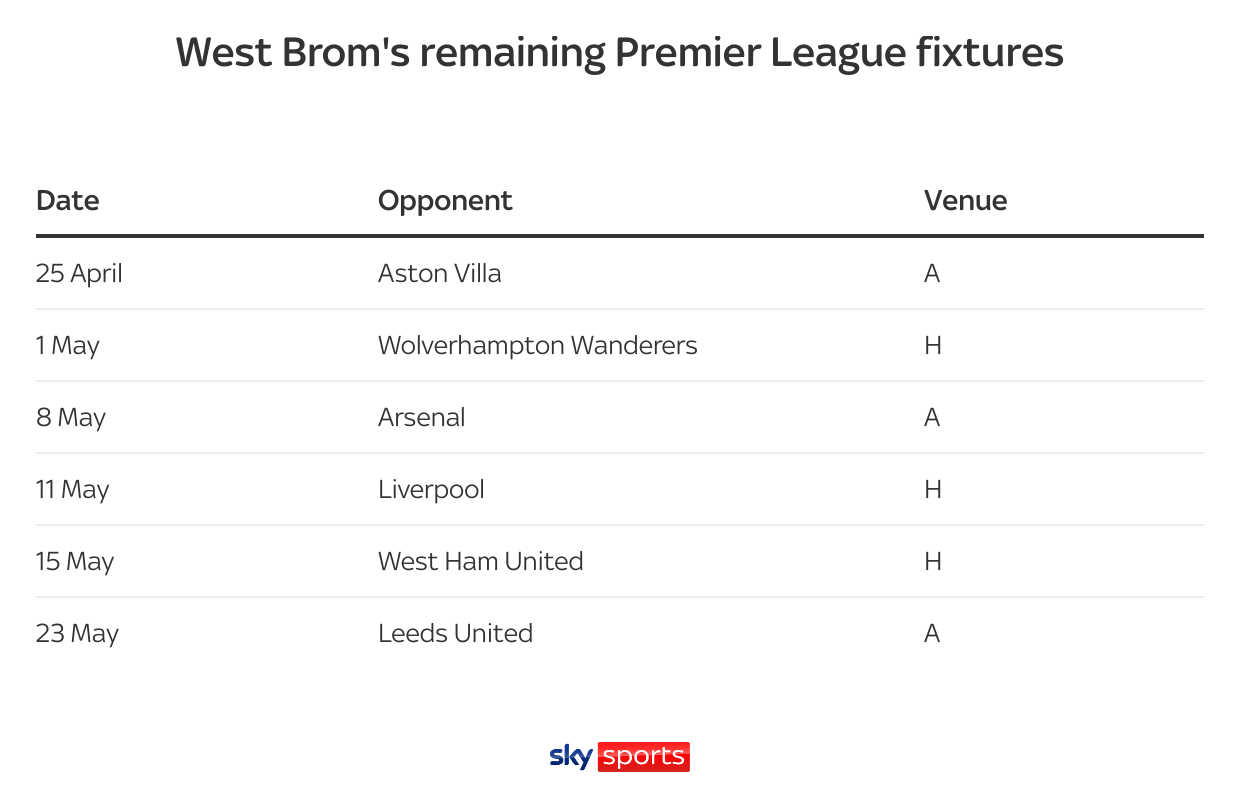 “Disappointed in the first half and the game was beyond us at that point, but we had to make sure we shut the back door on how good Vardy and Iheanacho were. We did that, but couldn’t play our way back into the game.

“We didn’t get anywhere near the game we’ve normally got to in the last eight or ten matches and you have to give Leicester a lot of credit for that. You can see why they’re in the FA Cup final and third in the Premier League. Apart from Man City, they’re as good a team that we have played against this year.

“We need to win five out of six to be certain [of Premier League survival], and we know that’s a tall order, but we need to win as many games as we can, starting with Aston Villa on Sunday… We’ve got to bounce back from this and try and do our best.”

Leicester are back in action at the King Power Stadium when they host Crystal Palace for Monday Night Football before travelling to play Southampton later in the week on Friday Night Football.

West Brom stay in the Midlands for their next two games against their two biggest rivals in football. It is Aston Villa away on Sunday for the Baggies before they host Wolves in the Black Country Derby on May 3.