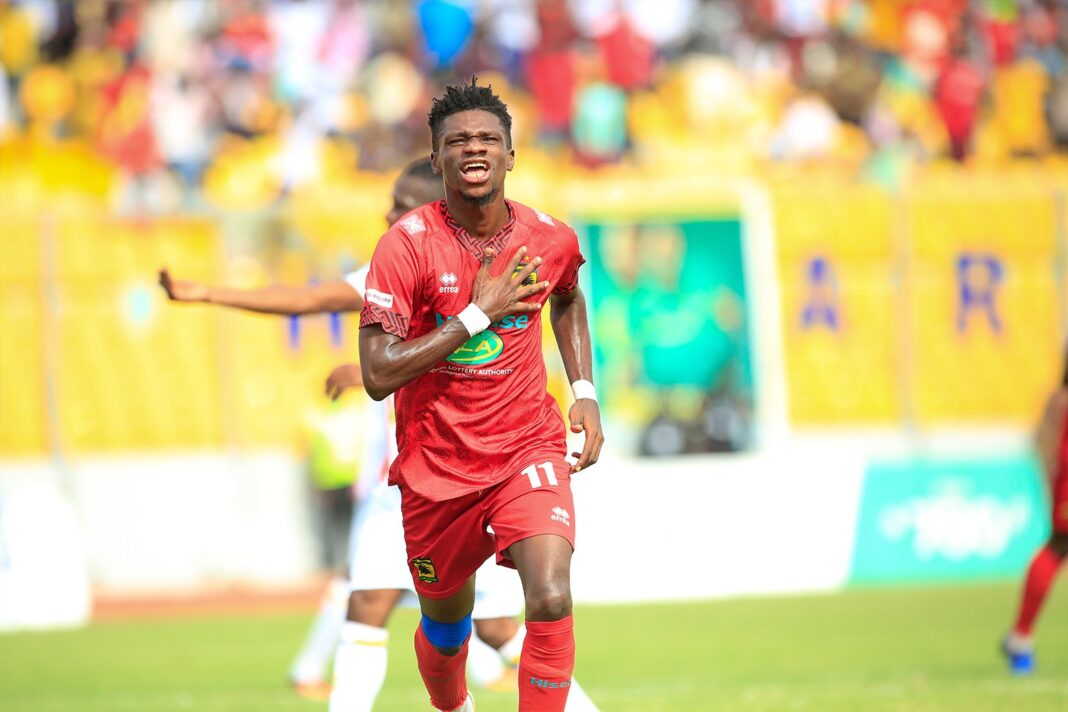 League leaders Asante Kotoko SC grabbed all the points against arch-rivals Hearts of Oak in their Match Day 24 of the Ghana Premier League at the Baba Yara Stadium in Kumasi.

The Porcupine Warriors scored in the first half to extend their lead at the top of the Premier League table and keep their momentum intact.

Franck Etouga scored from the spot inside 13 minutes after Fabio Gama was fouled in the box by Hearts of Oak midfielder Nurudeen Aziz.

Cameroonian import Etouga stepped up to take the kick as he sent goalkeeper Richmond Ayi the wrong way – taking his season tally to 16 goals.

With such a great start to the game – the Phobians uplifted themselves in search of the equalizer but their efforts yielded no positive outcome as Asante Kotoko defended gallantly to keep their goal area safe as they held on to win 1-0 at the Baba Yara stadium – their first win over their arch-rivals in their last five attempts.

The Reds lead the League table with 52 points after 24 matches with Bechem United at the second spot with 44 points.

Dreams FC shared the spoils with Eleven Wonders in a 1-1 stalemate at the Theatre of Dreams – Dawu. The Still Believe lads drew first blood through Ibrahim Abdulai in the 64th minute but Wonders put a bracing show in the last 10 minutes of the game as Ibrahim Laar fetched the equalizer inside 79 minutes.

Accra Great Olympics labored to a hard-earned 2-1 win against two-time Champions Aduana FC at the Accra Sports stadium. Maxwell Abbey Quaye scored in the 92nd minute to keep their top-four ambitions intact. Aduana FC shot into the lead in the 12th minute through Kwame Adom Frimpong before Idrissu Murad scored at the half-hour mark to draw the home side level. The game was heading to a draw until Abbey’s brilliance gave Great Olympics the match-winner in the closing stages of the game.

Bottom-placed Elmina Sharks recorded their 5th win of the season with Ishmael Antwi scoring the only goal of the match in a 1-0 win against King Faisal.

In Tarkwa – three goals were registered in the first half as Medeama SC condem Real Tamale United to their 11th defeat of the season in a 2-1 win. The home side opened the scoring through Darlington Appiah in the 8th minute. Mohammed Sadat canceled the lead with a 19th-minuteth minute equalizer. Ansu Kofi Patrick later restored Medeama’s lead with a sublime finish in the 27th minute to give the Mauve and yellows a 2-1 win.

Elsewhere at Bechem – Bechem United needed to dig deep to pick all the spoils as they scored in added time to beat Bibiani Gold Stars 1-0 at Nana Fosu Gyeabour Park. Emmanuel Owusu’s 92nd-minute goal was all the Hunters needed to seal the points.

Earlier on Saturday, AshantiGold annihilated WAFA 6-0 at the Len Clay stadium. Yaw Annor scored a hat-trick to propel the Miners at home. The goal-fest began as early as the 13th minute when Annor got on the end of a lovely move to slot home.

The winger added to the tally one minute later as the Miners take the game to their opponents. Aminu Adams netted the third goal inside 36 minutes before Henry Oware’s own goal in the 39th minute muddied the waters for the visitors.

Eric Esso smashed home the 5th goal in the 48th minute before Yaw Annor rounded things up to get his hat-trick – nine minutes from time.

Finally, Accra Lions gave their survival hopes a boost after beating Karela United 1-0 on Saturday. The close contest did not produce any goal in the first half as Lions winger Daniel Awuni received the marching orders in the second half. The only goal of the match was scored in the 71st minute through Frederick Asante who soared above everyone to head home Abbas Samari’s free-kick.

Chadwick Boseman’s $1.3M estate to be split between wife and parents