“He was proud and doing unnecessary show off”

A Nigerian woman, Bimbo Grace Kolawole on Sunday, April 18, marked the 17th year since she married a dude she used to hate with passion.

According to Bimbo, she was in senior secondary school when she first saw the dude that later became her husband and it wasn’t even ‘like’ at first sight.

In fact, everything about the man made her stomach cringe…from the way he used to blast music to how he showed up at their house to eat all their food and pock nose into matters that had nothing to do with him. Read Bimbo’s funny but heartwarming love story below:

So back in the days there was this bros that came from God knows where to stay with our Neighbor four blocks away from my apartment, when he is driving his car he will be blasting music like he is a DJ. Infact that was a big put off, I hated this guy with every once in me because to me he was proud and was doing unnecessary show off.

So when I saw our neighbor I was asking him who that lousy person in his house came from, our neighbor said he was a new staff who just came from Calabar, I think I was confused or maybe I just decided in my small head that this new guy can be nothing but a driver,

Ha my hatred for this dude increased, unfortunately for him he saw me on my way back from the Well and he asked his flat mate who I was, the guy told him to remove his eyes because that girl no dey smile ooo plus her father na one of the retired Major for the Quaters and very strict.

Do you know that as much as his flat mate preached to this guy he still brought his two legs to our apartment? Infact the moment he knew my mother sold Provision he will come and buy the most irrelevant thing anyone can think off. My mother liked him ennnn, then my older brother then my Dad, he literally became friends with my whole family. At this point everything about this dude irritated my whole being.

Okay so he also had the hubby of showing up at our door step as soon as I finished cooking and he would eat the food like he had a chef he employed to be cooking for him, my parents will even be reminding me to ensure his food is saved ooo. Me I’ll be like abi I shu give this bros indocid ni. His mother did not teach him not to be doing long throat ni.

Okay so he continued coming to our house and he had another hubby of chooking his mouth in talks that was clearly non of his business. Ha my dear sisters my parents fell so much inlove with someone I detest so much and my parents were even praying he marries one of their daughters. Me I kukuma did not send them.since I was still in SS2 so I wasn’t in the picture of one of the marriable daughters but the thought of this dude becoming my brother inlaw made my stomach cringe.

Okay so my dad started complaining that I don’t read, as my dad was yelling at me and me in turn has swell up like 3 days soaked garri this dude came again to puknose into the matter. Ha in my head I’m like this guy no dey tire ni He even offered toe teaching me physics and chemistry. As he offered I was muttering curse words deep within me. As soon as my Dad gave him to go ahead to lecture me I knew within me that this guy should me taught a lesson of minding his business and not crossing my lane.

Okay so he started to lecture me and I had no choice but to pay attention unless my Dad will port me back to factory reset. Then I sat for my SSCE and passed, chaiiii that even made this uncle a Champ in out house ooo. He doesn’t only blast music and steal people’s family members he also has brain to show off like super Mario.

Then my hatred became times 1 million and I was desperate to embarrass him, but I did not know how to do it. (How do you even think of embarrassing someone who helped you pass WAEC ) well I hated him that much ojare.

So one day his village people pushed him to beakon on me one day on the street when I was coming from the Well, with water on my head faaaaa this guy said and I quote ” You know I like you alot right?” Hahahaha me i put my water down from my head and started hurling curse at uncle, he stood transfixed holding his steering like he was in shook.

Me I vomited all the things I’ve been keeping inside me for over 1 year. After I was satisfied I carried my water on my head and shook my fat bombom back to our flat. Then it dawned on me that he might telly Dad what I did I began to sweat like Christmas goat. As soon as I saw him approaching our flat I wanted to write my WILL because my dad will bury me alive but I remembered that I don’t have any dependants so I maned up and waited for my sentence. This guy did not even report me to anyone oooooo. I was happy and well that still did not change my mind about him.

So I told a friend about him and how much I disliked him but that I think his eyes are one… ha greatest mistake of my life. This girl now said spend his money, teach him a lesson he will never forget. Me still think he is a common driver ooooo, I now told him I wanted to go to Mr Biggs, everyone knows that was the top notch eatery back in the days.

He fell for the trap, he was very happy that I even spoke to him, so he took me and my friend to the eatery, I started to order ooooo

My friend… Bimbo order more, he is not even sweating

I looked at uncle he was not even breaking a sweat but with a smirk on my face. I said I was done, well I was waiting for this guy to say he could not afford to pay do that I’ll tell him next time go approach your class not me. Me that I don’t have any achievements back then ooooo

. Bimbo I thought you said he was a driver

Me… shaking my head like agama lizard in affirmation

My friend… ha this one no be driver oooo, abi did he not just say double her order abi I did not hear well ni

That’s how we sha carry like 25 lylon filled bags of food that only wanted to eat. Sebi I wanted to act classy bros kukuma change am for me and turned me to ebina (food mongering moth)

I’ll drop my pen here…FYI. This year makes it 17 years and still counting that I married that dude. 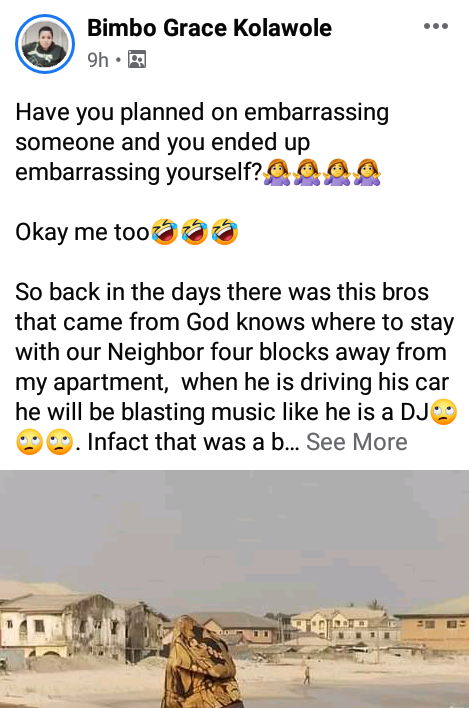 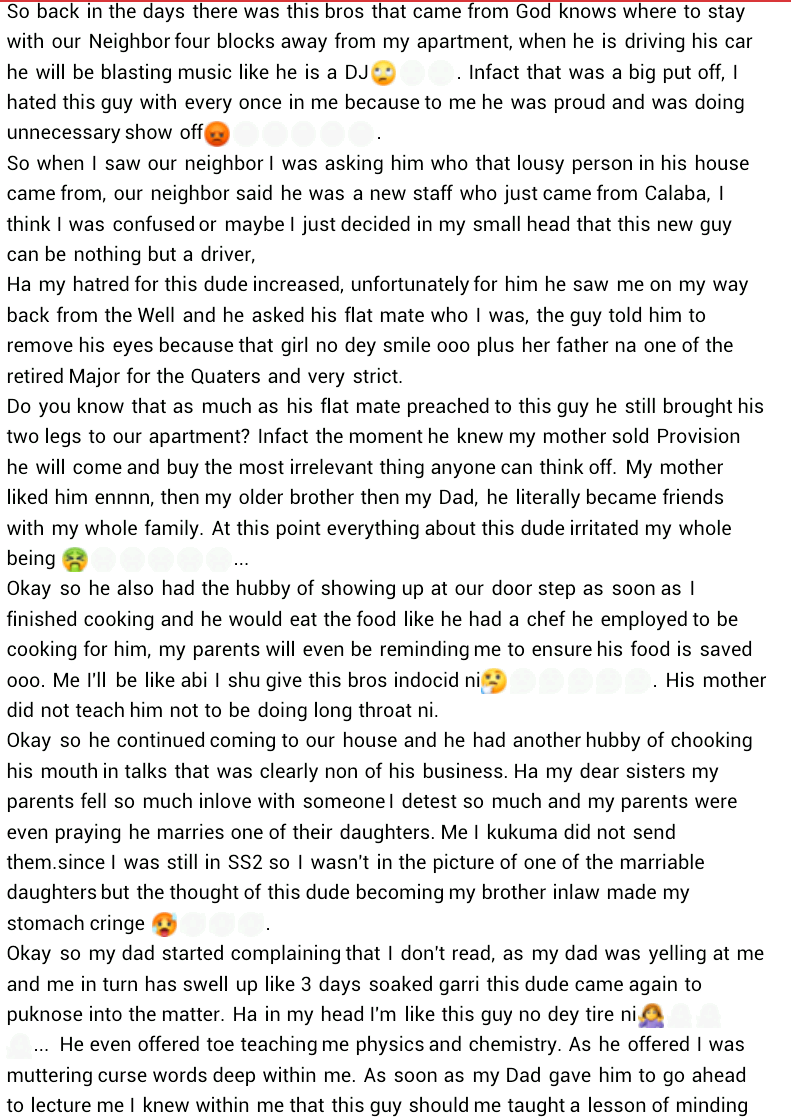 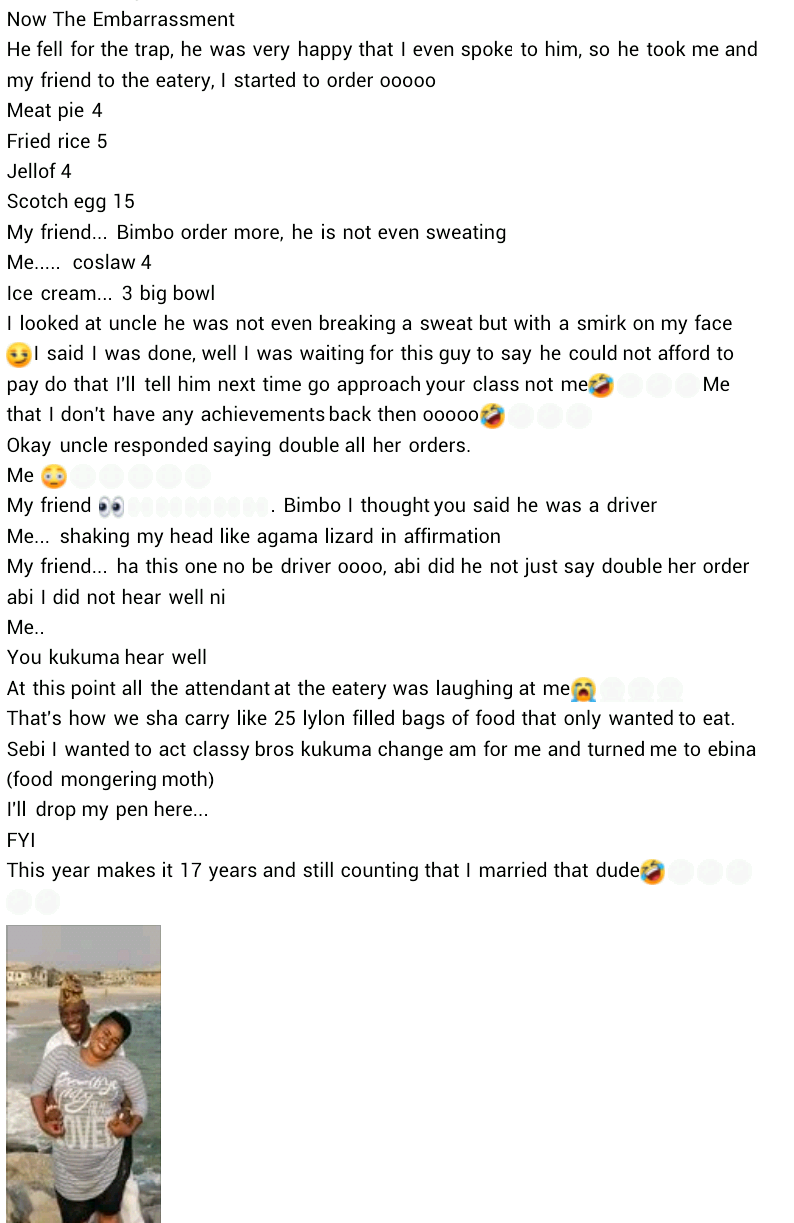