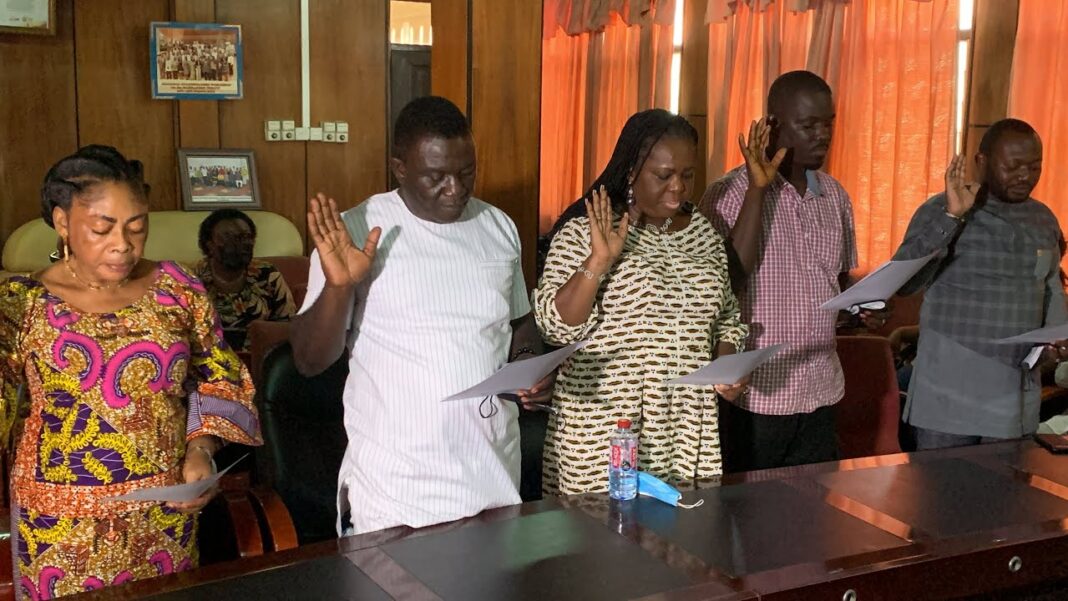 The Ghana Association of Phonographic Industry (GAPI) has successfully inaugurated a five-member board of trustees in a short ceremony that took place at the Copyright Office in Accra on December 2, 2021.

Present at the inauguration were a representative from the Attorney General’s office; Divisional Police Commander, ACP Mr Isaac Asante; Deputy Director for Elections at EC Mr Samuel Kwah; GHAMRO CEO Mr Abraham Adjetey and GHAMRO Chairman Rex Omar among other dignitaries and officials who formed part of the GAPI association.

The GAPI association since its establishment over two decades in the music industry had been proactive in the passage of the Copyright Act 690, revision of the Ghana Cultural Policy, and several engagements with the National Development Planning Commission in the development of policy direction for the creative industry.

Speaking after the inauguration, the Chairman Mr Amponsah said they were going to work in line with the Ghana Police Force to clamp down on ‘thieves’ who pirate digital content of creatives to sell at cheap prices.

He added that, one of the top priorities of the Board is to digitalise the music system to make royalties collection easier and simple.

We are advising people should stop selling songs on pen drives. Radio stations, TV stations and everyone who uses music for an event such as funerals and parties among others will have to pay. We are going to work towards that drastically. We will also work with the police to make the work easier, he said.

Meanwhile, the GAPI Vice President Rev Dr Nanayaa Owusu-Prempeh, who is also the CEO of Tin-Topic Production emphasised the need to pay mind to producers to reap benefits of their works.

Everything is being digitalised. The world is moving forward and not waiting for Ghana. We will make sure to put producers on the spot to reap the ultimate benefits of their works.

She also talked about GAPI aiding top musicians to have international collaborations with foreign musicians to boost Ghana’s music export.

We need to have international collabos and synergies that will push us forward. We will do our best to catapult decisions that will propel the music industry forward, she added.

Meanwhile, the General Secretary Richmond Adu-Poku said the new five-member team will work towards having a proper digital system that will help musicians to reap direct benefits from their songs.

Whatever cracks there are, we will fix them… one thing we need is to have a digital system to sell our songs and make money both home and abroad, he said in an interview with Adomonline.com.

Yeah, I killed my mom to buy Benz, if you are jealous kill your mom too to buy some- Sakawa man boldly brags in...