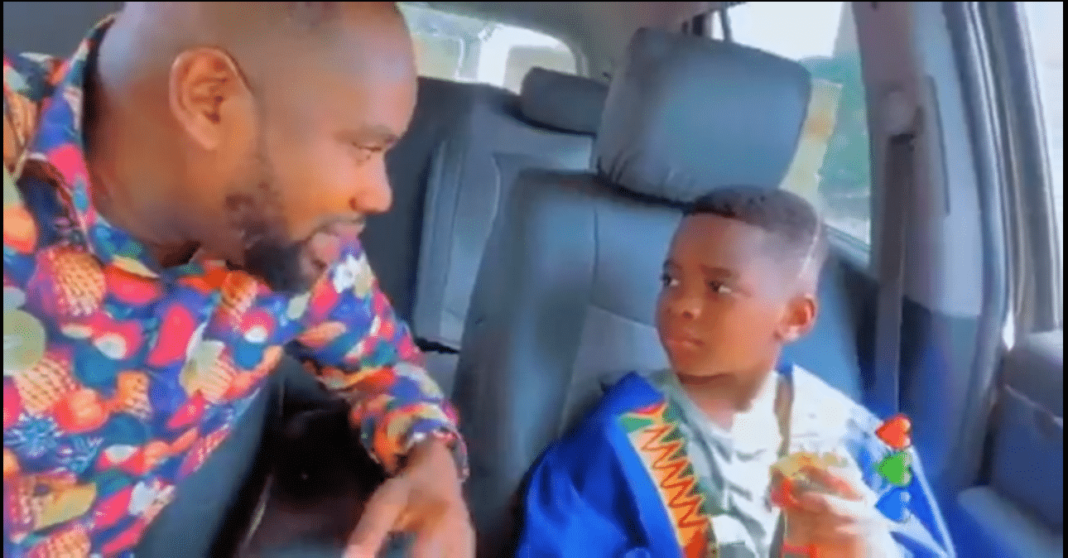 Ghanaian media personality Kwame Obodie decided to counsel his crying son, who was not happy with the fact that he failed to top his class in the exams.

His son was emotional after he had received his results and presented them to his dad. The young lad with a heavy heart sobbed uncontrollably because he felt he had failed for not emerging first in the exams.

However, his father, who has made a name for himself despite all the setbacks he faced in life decided to use his life to console his son.

Kwame Obodie helped his son to understand that being first in class or being the brilliant one does not guarantee success. Counselling his son who was wiping his tears wearily with the back of his hand, Kwame Obodie continued:

“See, you don’t have to worry, Being first in class does not guarantee success in life. Look at me, I had a lot of setbacks but I have been able to make it and that’s why I am able to take care of you.”

“Stop worrying about your grades. You did very well and be happy for the one who also topped the class.”

A lot of kids are very particular and sensitive about little failures in their lives. They react and sometimes break down when they are not able to get what they want out of life at a younger age.

Thus, Kwwame Obodie was quick to point out the reality of life to his son and made him understand that the failures in life tend to shape the future of every individual therefore he shouldn’t beat himself dead for not topping his class.

Watch Video Below For More:

Five benefits of having s3x with an older man