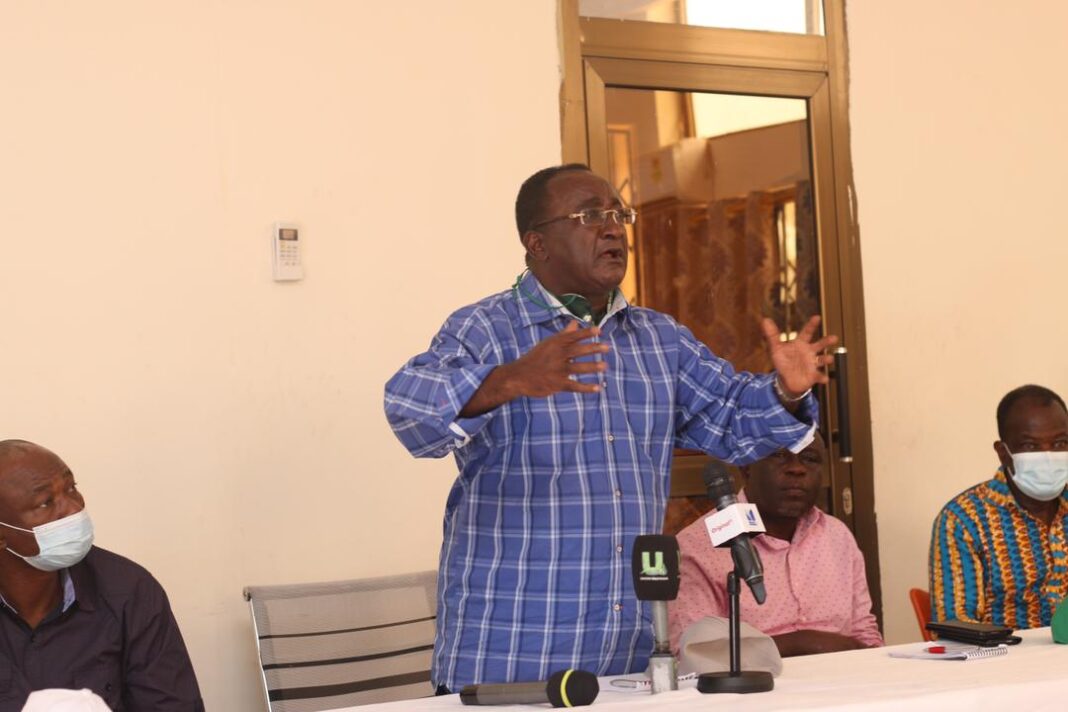 The Minister of Food and Agriculture, Dr Owusu Afriyie Akoto, has justified the proposed E-Levy being introduced by government.

According to him, it is the only way government can raise enough revenue for developmental projects.

The Agric Minister described as unfortunate the position taken by the Minority in Parliament on the E-levy.

He is certain with education and consultation, they will support government.

Dr Akoto made the comment when he visited one of the government’s built warehouses at Gambaga in the North East Region on his first day visit to the region as part of his 13-day tour of the northern sector.

The warehouse contained thousands of tons of harvested rice for safe keeping.

Prior to the visit to the warehouse, Dr Akoto held a durbar with stakeholders and farmers in the agriculture industry in the region where he encouraged them to support the government’s policies in the sector.

These, he said, included Fertiliser Subsidy, Planting For Food and Jobs ((PFJ) among others aimed at improving farming activities in the region.

On shortage of fertilisers, he indicated that the government was seriously working to address it.

“We are making arrangements to ensure that farmers in the country have fertilisers to apply to their crops,” he assured.

He explained that the problem has come about because of the global shortage of fertiliser, adding that this has caused increases in the price of fertlisers.

He said, regrettably Ghana does not produce fertilisers, however, he added that the government has subsidised fertilisers for farmers by 50%. This facility, he said, started when the government begun its PFJ programme.

While admitting that there were demands for warehouses, he averred that the uncompleted ones will be worked on as quickly as possible.

The Minister also paid a courtesy call on the Overlord of Mamprugu Kingdom, Naa Bohagu Mahami Abdulai Sherigu, at his Nayiri Palace.

Naa Bohagu Mahami Abdulai Sherigu thanked the minister and his directors for making time to visit his community.

He recounted how his senior brother who was an agriculture extension officer helped him in his farming activities.

He, therefore, challenged the Agriculture Minister to ensure that extension officers carry out the needed knowledge to the farmers to improve their yields, adding that the region was one of the leading food baskets in the country.

For his part, the Municipal Chief Executive (MCE) for Mamprusi West, Aremeyaw Somo Lucky Basiutaly, who spoke on behalf of the farmers, mainly rice farmers, mentioned some challenges bedeviling the farmers.

These, he mentioned, included no power at the processing centre and a lack of warehouse in the district for rice farmers.

He, therefore, appealed to the minister to help resolve these challenges.

From the palace of the Overlord of Mamprusi, the Minister and his team visited the Presbyterian Agriculture Services at Lanbinsi Tenguri where he interacted with the women farmers and promised to support their activities.

He then took his visit to Tamanaa Rice Factory located along the Tamale Highway where rice in its raw state is processed, packaged and sold to the final consumer or exported.

Tears flow as ‘Ekwueme’ singer, Osinachi is laid to rest

Tears flow as ‘Ekwueme’ singer, Osinachi is laid to rest

I have not endorsed any flagbearer hopeful